It had been almost eight agonizing years of waiting. Being a Michigan trout fisherman and to have never experienced the Hex hatch was becoming my Achilles heel of my trout career. Oh I have tried and tried following various tips from many friends and guides.Its too cold, your too late, last week was happening . But every year I would go and wait at various locations only to be rejected time and time again. Last year I did hear a fish but then a downpour came and It was over. With my touring schedule really being slow due to covid I took a couple of days last week to head up to Northern, Mi.The weather seemed right ,warm and muggy and no moon.I ran into a new fisherman named Neil at the river and he offered me some bugs, bug spray and company. He knew this hatch well and felt it could happen. We walked in a long way and settled on a bend and waited. Neil took a few small fish before dark and the bugs came but few fish. He did have me wade in the dark to a dimple in the water .We think the fish made a move but that was all. The next night I would arrive in the same area early and wait again. I could anticipate a more productive night. After a two hour wait it became pitch black and I started to see the elusive Hexagenia Mayfly . All of a sudden 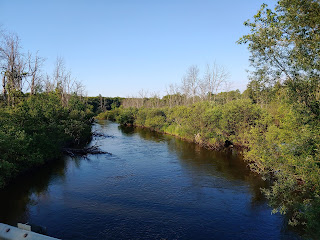 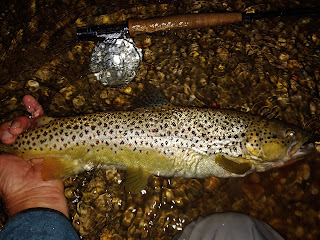 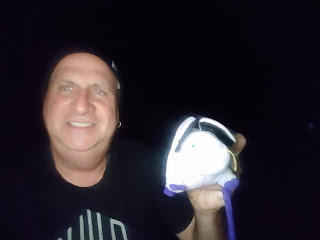 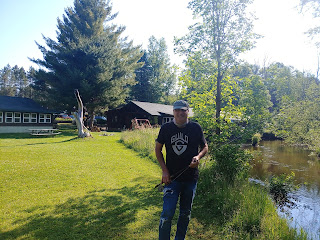 hundreds if not thousands of aimlessly flying bugs  over the river. Next I noticed silver flashes in front of me which I assumed were fish.I spent 20 minutes drifting my Hex spinner  downstream and could not get a take.It was then I noticed a soft circle rise upstream about ten feet away close to the bank. I made three casts and on the fourth I felt a pull and connected with a strong fish .The power of this fish was amplified by the surrounding darkness
It made several strong runs and I was able to put my hands on a beautiful 20 inch plus brown.After a quick photo he swam off. I was in shock but decided to keep fishing. Just that quick the water was still and as if  the bugs or fish never existed. That must be the allure of this famous hatch I will be back!!! Tight Lines, Keith
Posted by Kso at 7:54 PM 1 comment: